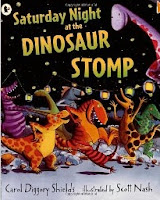 Snappy Dinosaurs. Office lift-the-flap.  Fun intro, but this group could maybe have taken something a little more challenging.
Tyson the Terrible in storyhour reference. Our copy is much abused but I love the boom boom booming.
Are the Dinosaurs Dead, Dad? by Julie Middleton. Dead pan funny. As the (pompous) dad leads the boy through the dino museum, the boy notices them coming to life -- but the father ignores them until they pass by T. Rex.  Great, great pix and a short witty text. Many complaints from the scientist in the audience.
Dinosaurs Love Underpants by Claire Freedman.  Forestall the remarks from the scientists in the audience about dinosaurs living with cavemen by reading the title of this funny book in a completely appalled voice.  Underpants?!!! Dinosaurs love.... UNDERPANTS?!!!
How Do Dinosaurs Go to School by Jane Yolen. Another nice one in the series.
Note:  Usually I do a whole school theme, but this year with the early back to school start, the scheduling got away from me. So I'm definitely glad I picked this one book. But on a show of hands, not all the kids are starting to school anyway, so I'm just as glad not to have spent the whole storytime talking about going somewhere the homeschoolers and the very young won't go.
Too Many Dinosaurs by Mercer Mayer.  "Are there any dinosaurs at all in this book?" I ask.  "They're hiding in the bushes!" Oliver warned.

I'm Bad! by Kate McMullan.  Can anything as big as an apatosaurus... get scared?
Dinosaurs in Disguise by Stephen Krensky.
Next year:  Gorgonzola by Margie Palatini

Dinosaurs Galore! by Giles Andreae, which I coupled with beautiful flannelboard dinosaurs. I read the rhyme and let children take turns putting up the dinosaurs.
Saturday Night at the Dinosaur Stomp by Carol Diggory Shields. (Big Book) I skipped a few pages, but this book pulled the young ones right out of their seats -- which may or may not have been a totally good thing.


Craft
The kids cut them out, and then painted them with poster paints mixed with flour, shown here. The idea is just to add enough texture to the paint to make it interesting. I showed the kids how to paint in swirls, like scales. I just gave them q-tips.

This year I had teen volunteers do the cutting, and I had t-rex as well. Each child did one steggie and one t-rex and then attached a craft stick to the back to make them into puppets. They were easier to carry that way and then they could fight with them too. 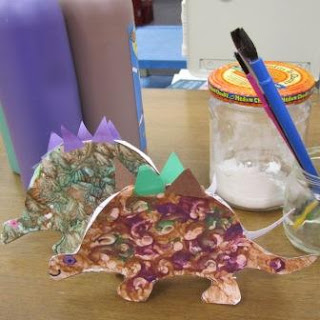 Last year, Our craft was painting cute stegosauruses with a texture paint. Recipe at Make and Take  Basically just mix a little flour in with the paint. I downloaded a stegosaurus template from http://ysostorytime.pbworks.com/f/Dinosaur.bmp and printed it out on the bottom half of a sheet of card stock. Then I folded the sheet over and cut it out, leaving it attached at the top fold so that I made a little stegosaurus critter that could stand up.  (I would have let older children cut their own out.) I showed the kids how defenseless these poor stegies were. No spikes. So they attached spikes to the tops of them with glue sticks, choosing their own colors, always an interesting process, and then they decorated their stegies. We don't know, stegies might have had purple flowers on their scales. Stamping them would have been fun too.

Posted by TravisAnn Sherman at 12:44 PM

Email ThisBlogThis!Share to TwitterShare to FacebookShare to Pinterest
Labels: dinosaurs